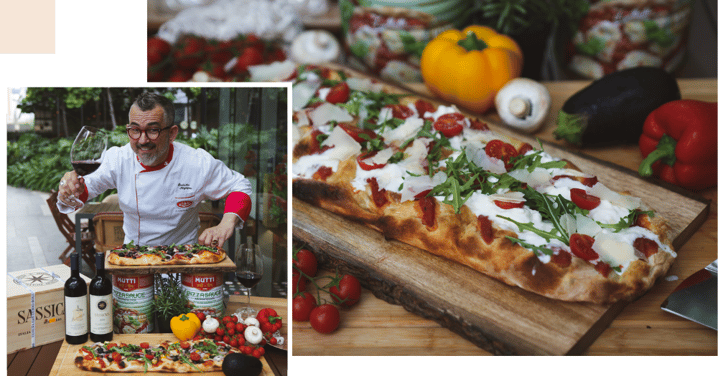 Pizza may have its origins in Italy, but there is a famed pizza master in Bulgaria, Chef Radostin Kiryazov, who has perfected the art of Romana pizza and even earned himself the title 'God of Italian Pizza'.

After 20 years of kneading pizzas, Chef Radostin has now brought his pizzas to Singapore at L'Arte Pizza & Focaccia.

When we think of pizza, most of us will think of Neapolitan-style pizzas which are commonly found in Singapore - round pizzas with a thin, bubbled crust. Romana pizza, however, has a rectangular shape and a thicker, crispy crust.

The difference in their taste and texture lies in the dough. Romana pizza dough has olive oil which gives it flavour and that characteristic crisp. Because this type of pizza is cooked at lower temperatures and has a hardy crust, the toppings come in a wider variety and in more generous portions.

Chef Radostin is bringing his well-loved Romana pizza to Singapore and serving it as he does in Bulgaria. His new venture at our shores is L'Arte Pizza & Focaccia, a takeaway joint located right above Tanjong Pagar MRT Station outside Guoco Tower. There's also an option to dine-in at the casual seating areas.

The pizza dough is hand-kneaded and made with flour imported exclusively from Italy. While we often see pizza doughs being tossed in the air, L'Arte's dough is much too soft for that and is stretched with a rolling pin instead.

I had a taste of L'Arte's pizza crust on its own and was surprised by how flavourful it was on its own. And thanks to the air pockets inside, the crust has plenty of bite to it yet remains light and crispy, with a very audible crunch.

L'Arte Pizza & Focaccia is starting with 10 flavours, each with artisanal toppings and fresh ingredients. They also have plans to roll out localised flavours in the future.

If you have stomach space to try just one pizza flavour, definitely go for the Tartufala (Whole $34 | Slice $9.50). The unanimous favourite of the group, this pizza is topped with creamy white sauce, mozzarella, truffle cream, ricotta cheese, rocket leaves and Parma ham, then finished with parmesan. A single bite is a burst of rich flavours, yet the hearty taste of the crust still shines through.

Cheese lovers will love the Formaggi (Whole $28 | Slice $8), a white based-pizza with mozzarella, gorgonzola, scamorza and parmesan. While I find many four-cheese pizzas a tad overwhelming, this one is refreshingly not the case as the thyme adds a sharp, earthy flavour which balances with the rich cheeses beautifully.

The Diavola (Whole $28 | Slice $8) seems most suited for the Singaporean palate. It has spicy Italian sausage, tomato sauce and mozzarella with red onion, black olives and grilled pepper.

Another personal favourite is the Mortazza (Whole $34 | Slice $9.50), which has a lovely combination of savoury, nutty and tangy flavours from the mozzarella, artichoke cream with ricotta, cherry tomatoes, mortadella and crushed pistachios.

Allocate some space for the dessert pizza, the Nutella (Whole $20 | Slice $6), which won Chef Radostin the first place in the Pizza World Championship 2005 in the Dessert Pizza Category.

The pizza pie is drizzled with Nutella and topped with banana, strawberry and mint leaves. The classic combination of cocoa and mint gives it a sweetness that isn't the least bit cloying, but the star of this dessert is no doubt still the delicious crunchy crust.

As L'Arte Pizza & Focaccia is mainly for takeaway, their pizzas are designed to remain fresh and crisp even after it reaches our home or office. Simply toast it for two minutes to bring it back to its original glory.

Pizzas are baked in small batches upon order and is available in limited quantity daily.

3
25 Jan
This Shoe Brand Has Adorable Sneakers With Character Illustrations, Get Them Online In Singapore