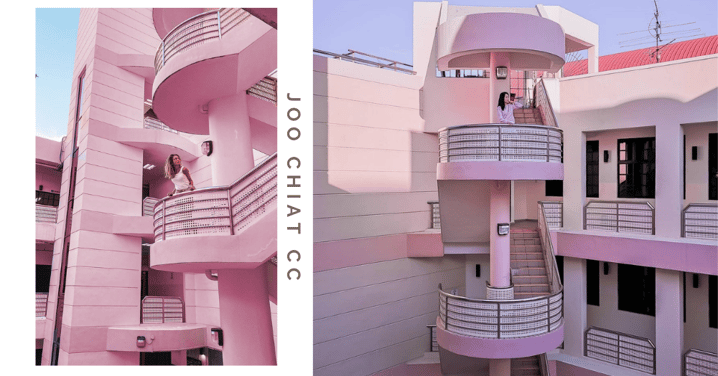 Despite Singapore being a concrete jungle with plenty of steely skyscrapers, pastel buildings aren’t a rarity here. Just stroll through older HDB estates or places with conservation shophouses, and you’ll come across quite a handful of these charming structures.

The row of Peranakan shophouses along Koon Seng is one of these areas, but just a stone’s throw away from that is a hidden pink photo spot that we’d like to let you in on: Joo Chiat Community Club (CC). Yes, a pastel pink community centre, with whimsical “Accidentally Wes Anderson” vibes to boot.

Read on to find out more about the pink Joo Chiat CC in Singapore!

If you’re scrolling through Google Maps in search of an eatery (or Paws Claws Cat Cafe!) and happen to see Joo Chiat CC on it, you’re unlikely to give it a second thought, much less decide to make a trip there. After all, community clubs are just boring, nondescript buildings with nothing particularly special about them, right?

Well, that’s where we’re wrong - as far as Joo Chiat CC is concerned, at least. For one, this CC is washed in a retro-esque pastel pink shade, which already makes it instantly attractive.

But it's not just its colour that makes it unique. The very architecture of the building is worth a mention as well. For one, check out the circular “cut-outs” along the corridor walls, which create the perfect framing for portraits and symmetry shots.

The staircase is another focal point that has become the subject of many an Instagram post. It’s not quite your regular half-paced stairs, for the landings have curved edges, which make them look like mini balconies in a way.

Try snapping your shots from different levels of the staircase and playing around with angles! Stand at the lower floors if you’d like to capture some eye-pleasing right angles where the building’s walls meet. Alternatively, stand on the highest landing, and have your Instagram boyfriend/bestie angle the camera upwards to capture the blue sky for a dreamier effect.

Don’t forget the sides of the building too! There’s an interesting blend of textures to look out for here, present in the vertical lines down the pillars, metal grilles, and crystalline windows.

In photos, Joo Chiat CC doesn’t look like a community club at all, nor does it look like it’s part of Singapore. Just a heads up, though - the photographs featured here likely involve some form of colour retouching, so do manage your expectations when heading down, and be prepared to do some editing on your own photos to make the pink hues really pop.

You could simply increase the saturation while decreasing the contrast, add a pink tint or filter, or try this TikTok phone photo editing formula.

The nearest MRT station to Joo Chiat CC is Dakota MRT station. Take Bus 16 or Bus 33 from Exit A of the staton (3 stops, ~15 minutes) and alight opposite Maranatha Hall. From there, your destination will be a short 7-minute walk away. We don’t suggest attempting to walk from the train station, ‘cause that’s going to take you almost half an hour.

Share this with a friend who loves all things pink!