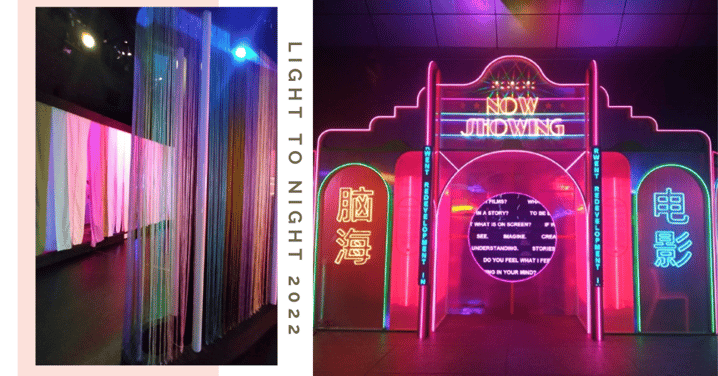 12 Most IG-Worthy Installations At Light To Night 2022, A Free-Entry Light Art Festival Open Till 12AM

Need a wholesome night outing idea that doesn’t involve downing pints at the bar? The annual Light To Night Festival is back for its 2022 edition to dazzle up your evenings once again. With so many light installations and projection works scattered across the Civic District, the event can understandably be confusing to navigate.

To make things easier, here’s a guide to the 12 best exhibits we've sussed out at Light To Night Festival 2022, sorted by location. These are the most Instagram-worthy ones you can make a beeline for if you’re short of time and want to whittle down your list.

Note: Most of the exhibits are open during the day, but we recommend visiting after 7pm or 7.30pm when the sky is dark for the best experience. Exhibitions within the museums are subject to various museum opening hours, but those located outdoors generally run till late, some even till midnight!

For more date and outings ideas, check out our list of 19 new things to do in Singapore in January 2022.

Read on to find out more about Light To Night 2022 in Singapore!

#1: A Tessellation of Memories - rainbow tassels

Go back in time to revisit forgotten bits of Singapore’s past with A Tessellation of Memories, full of lost stories to uncover from our rich history. This dark winding pathway is marked out using rainbow-coloured tassels and fabric, with infinity mirrors giving a glimpse into 6 locales of our Little Red Dot along the way.

#2: The Same Side of the Moon Always Faces Earth - 3D walk-in “horizon”

The Same Side of the Moon Always Faces Earth is an ode to the migrant seafarers who left their own shoes for Singapore in the past, with the 3D structure depicting the ocean’s waves and the moon along the horizon. The artist also uses this to explore the idea of there being a true North - a single point that one can find solace and direction from, whether literally or metaphorically lost.

This is a walk-in installation that can be entered from any side, and there’s also an accompanying soundscape meant to be enjoyed with headphones.

While everyone’s clamouring for a spot in front of the National Gallery’s light show, there’s also a smaller-scale one further in at The Arts House called Art Skins on Monuments: Fleeting Flights, which is equally worth checking out. In fact, I personally preferred this one as the animations were more whimsical with a sort of story going on, and the music was more upbeat.

This light and sound show repeats continuously so there’s no need to worry about missing any portions.

#4: As The River Flows - glowing orbs

Aptly located in the River Room of the Asian Civilisations Museum, As The River Flows is an immersive light and sound experience that draws inspiration from the Singapore River, with a formation of glowing orbs. Look closer, and you’ll see that these colourful globes are actually made of plastic baskets - the old-school kind that you’d find at the wet market or fruit stalls.

Also inspired by the Singapore River is The River Connects, which delves into the idea of human connection. The dancing patterns you see on the floor here are actually a blend of archival and 3D scanned images of the various bridges across the Singapore River, which have paved the way for trade, movement, and interaction in general.

Make sure you step through the doorway at the side for a little surprise inside, and also check out the surrounding stations for informative displays and a fun see-saw that’ll bring back some childhood fun.

Lumba is modelled after the sailing boats in a sea sport called kolek lumba, which was once held in this very district of Singapore many decades ago. Wave through these sailboat sculptures and watch as how this motion alters the way the light emits.

#8: Into Multiplicities - ethereal projections in a grand dome

It’s not often that one gets to enter the Rotunda Library at National Gallery Singapore, a 2-storey wonder with royal-looking Roman columns and high dome ceiling. After all, it is only open to the public on selected weekdays, and time slots are very limited. With Art Skins On Monuments: Into Multiplicities, you now get a chance to waltz into the grand library even on weekends, past regular opening hours.

What you’ll be treated to here is an ethereal light and sound show, with projections displayed on the dome itself. Lie back in one of the many chairs available and watch as the images shift from clouds to jellyfish and abstract designs. A must-visit!

Read our article on the Rotunda Library here.

It’s pretty impossible to miss the giant letters spelling out the festival’s name, which make up the Harmonic Spectrum installation. These are set on the steps of the National Gallery, which are lit up in CMYK light strips in shades of blue, green, and red.

And this leads us to the next point…

#10: Refractioned - for chill picnic dates on a lawn

Checking out Harmonic Spectrum means killing two birds with one stone, as the aforementioned  is set against Art Skin On Monuments: Refractioned - a large-scale light projection show spanning across the entire facade of the National Gallery. This loops consecutively from the time it starts, so there’s no need to worry about rushing down just to catch it at specific timings.

Don’t just stand around to watch the spectacle - get comfortable on the grounds of the sprawling Padang! The grass here is carpet grass, which is super soft and clean during dry weather, but if you’re worried about soil dirtying your clothes, you can always bring along a picnic mat. Now here’s an idea for a chill date that won’t cost you a single cent!

Making Room is a series of geometrical structures suspended from the ceiling of National Gallery Singapore, meant to represent the shift in our personal spaces and the mental adjustments made due to the current global situation of uncertainty.

It’s visible from Level 3, but is best admired from the wide steps on Level 2. During the day, natural light streams in beautifully through the semi-opaque white panels stretched across the beams. It’s equally eye-catching at night, where you’ll get to view it from a different perspective, with hints of colour brought about by the surrounding light projections outside.

While you’re catching the projection art on the facade of National Gallery, you might as well check out Flight. Inspired by a flock of birds and their moving wings, this is an interactive piece that uses light, shadows, and colour to create the illusion of movement. Turn on the Bluetooth function of your mobile phone or other devices to trigger different light patterns!

Needless to say, this has become quite a popular photo spot. Instead of simply standing in front of the structure to snap a regular OOTD, try having your friend stand on the opposite side from where you’re at, with the camera lens peeking through the bars for a more avant garde effect.

These are just some of the installations available on display at Light To Night Festival 2022, which will run for 3 weeks. There are also other fringe activities like performances and a Festival Market. Find out more here and check out the full list of programmes and their specific timings here.

Share this with a friend who loves light installations!