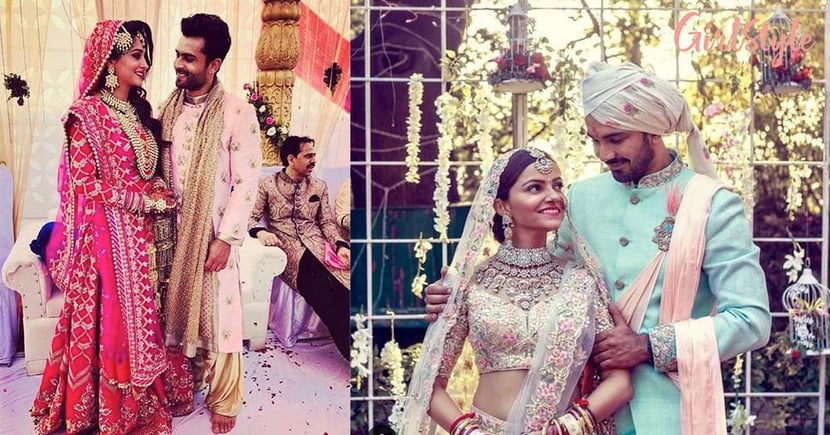 They are everyone's favourite bahu, bhabhi or the ultimate vamp on the show. We have seen them in so many avatars and almost all the women have sometimes followed their shows religiously. They are none other than the popular television celebs! We have seen them getting married like a gazillion times on-screen but their real-life wedding looks have created waves among their fans.


So, for all the brides-to-be who wish to get a look at their wedding outfits or wish to get something similar for themselves, then here is some wedding fashion inspo for you all! The laughter queen Bharti Singh was looking gorgeous as ever in Adhya's blue & fuschia pink lehenga and a gorgeous dupatta with Swaroski embellishments. Her lehenga was definitely the star of the show! For makeup, she opted for a light base and went for a bright pink lipstick that matched her lehenga. Her hair, jewellery and everything else was on point for her grand memorable day! Photo from The Indian Express

The current Bigg Boss contestant has already won hearts in her previous show Sasural Simar Ka. And on her wedding day, she gave us yet another reason to crush over her. Dipika looked like a total stunner on her D-Day in a pink sharara. She accessorised her bridal outfit with paasa and Kundan jewellery. She looked like a dream in the Muslim bridal look which was accentuated by her kalire. TV Actress, Aashka apparently had two wedding ceremonies. And we think she is super lucky to get a chance to dress up twice for the biggest day of your life. For her Hindu wedding, she chose a royal maharani-style lehenga. The outfit consisted of a gold Kasab choli and light tulle odhni with delicate metal sequins that added all the glitz, glam and feminity to the whole look. Rubina's lehenga was indeed the most breathtaking lehenga we have seen in the history of television wedding looks. The actress ditched the typical red lehenga and opted for a gorgeous and completely hatke lehenga in a white pastel hue. She looked like a vision in her white classic bridal ensemble which had silver and pink floral embroidery. She accessorised her lovely lehenga with a maang tika, matching jhumkas, lac bangles and layered choker. Somya looked ethereal in her wedding avatar wearing a traditional red lehenga and added more charm to her overall look with kalire and chooda. She looked like a princess in her bridal outfit with a glowy makeup look, red lipstick to add the right amount of pop, pretty choker, a long necklace and a pretty maang tikka.