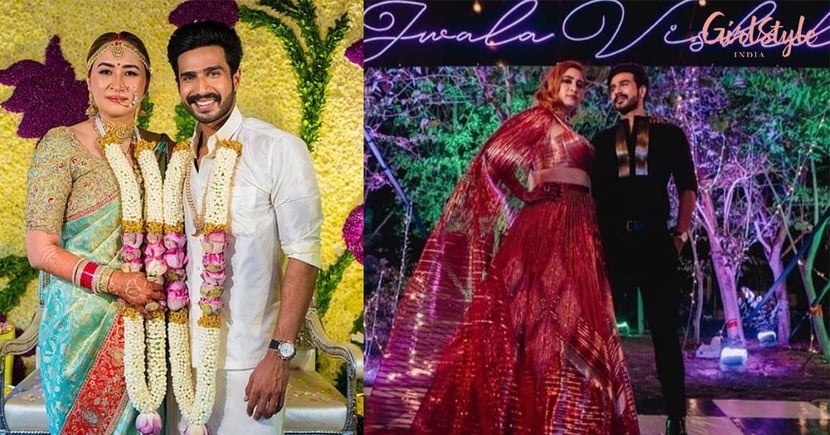 Jwala Gutta-Vishnu Vishal Tie The Knot, Have A Look At Their Pics

Badminton player Jwala Gutta took wedding vows with Tamil actor Vishnu Vishal in Hyderabad.  Many prominent personalities became the part of celebration. Their pictures surfaced on the internet are going viral for all right reasons. The bride looked beautiful in a saree whereas Vishnu was also dressed in a traditional attire.

Have a look at their wedding pictures:

For the reception, Jwala wore a hot pink lehenga with sequin detail all over it.

Jwala was married to fellow shuttler Chetan Anand in 2005. Their marriage ended in 2011. Vishnu and Rajini Natraj married in 2010 and got divorced in 2018. They also have a son.

Talking about relationship with Jwala, Vishnu said, "After my separation with Rajini, I met Jwala and started spending a lot of time with her. She is a very positive person and that’s what I like about her. She had also gone through a separation in life. We spoke, understood each other and things are going fine."

Vishnu and Jwala got married after dating each other for almost 2 years.

Earlier, Vishnu also said, "We are going to get married real soon and I am going to become a Telugu alludu (son-in-law) now. I am extremely happy about it. I will announce the wedding date soon."