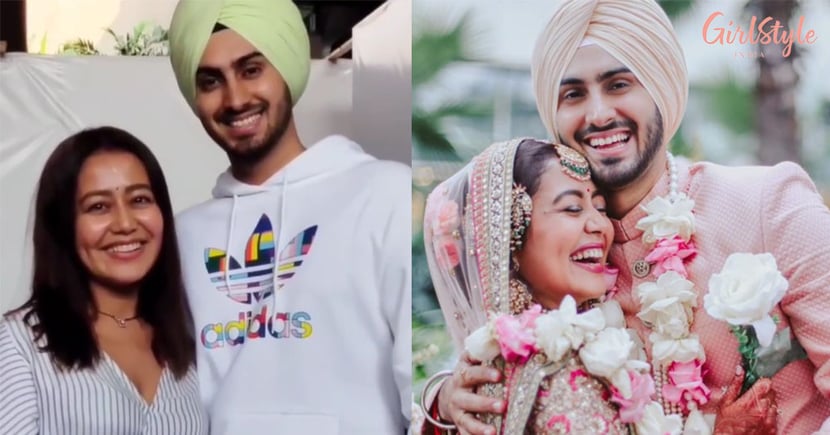 After their 4-days-long marriage, newlyweds Neha Kakkar and Rohanpreet Singh have returned to Mumbai. The couples walked hand-in-hand as they posed for shutterbugs. The lady wore a white striped co-ords whereas her husband opted for a white sweatshirt. With chooda and sindoor, she looked like a nayi naveli dulhan. Both the stars were beaming with happiness.

The couple had a Anand Karaj ceremony and later a grand Delhi wedding. From singing songs to dancing their hearts out, they had a blast.

Check out their video:

For Anand Karaj, Neha wore a pink Sabysachi lehenga whereas for the night wedding, she wore a red Falguni Shane Peacock outfit. Neha donned a silver-white lehenga with emerald green and diamonds necklace at the Chandigarh reception.

Earlier, Aditya Narayan was suspicious about Neha getting married. Talking to Bollywood Hungama, he had said, "Is she really getting married? I haven’t received the so-called wedding invitation. It’s all very strange because she met this guy for the first time when they shot a video together a few weeks ago. Is it possible for someone to meet and marry in a month? Neha is no giddy headed teenager. Significantly neither Neha Kakkar nor her alleged groom-to-be has made any statement about the supposed wedding. All I can say is, I do hope it’s actually happening. Otherwise why have the two parties in the supposed wedding alliance slowed rumours and unconfirmed reports to go this far?"

On a related note, Neha and Rohanpreet's first collaboration, Nehu Da Vyah, released recently. During their wedding festivities both the stars were seen singing the song.