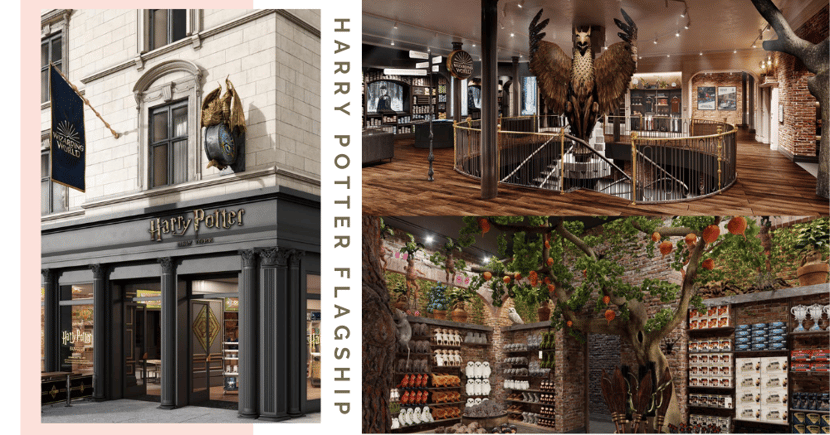 Amidst the mundanity of everyday life, there are always pockets of magic to be found. Some lose themselves into the pages of fantasy novels, or escape to another world through a favourite TV series. As for all the Potterheads out there, they will soon be able to go beyond the books and movies and enter a brand-new, real-life manifestation of the Wizarding World come 3 June 2021- with the world’s first Harry Potter flagship store.

Located along the Flatiron District of New York City, this Harry Potter store will feature 15 themed zones full of Hogwarts and Fantastic Beasts merchandise, along with life-sized installations and interactive VR experiences that will transport you right into the Potterverse.

Read on to find out more about the Harry Potter store in New York City! The Harry Potter flagship store in NYC isn’t just a regular ol’ retail shop - it’s a whole experiential galore. Stepping in, you’ll first be met with a giant sculpture of Fawkes the phoenix suspended from the ceiling, which took professional prop artists months to design and create.

More of such models can be found throughout this 3-storey wonderland, including a majestic griffin standing tall by the staircase. As you can expect, there will be tons of merch up for sale, from apparel, to lifestyle products like plushies, and decorative items. But what stands out here - compared to the little retail sections of various Universal Studios theme parks - is the massive wand section with over 50 designs based on various characters in the franchise. This includes the Golden Snitch wand, a New York-exclusive.

These wands can even be personalised with an engraving of your name! Speaking of personalisation, it’s also possible to get your own Hogwarts witch or wizard robes custom-embroidered here, or have a journal embossed. But wait, there’s more! Shopping aside, you’ll also get to have a whirl of fun with interactive experiences in-store - including VR games where you’ll be zooming on a broomstick while fighting off evil Death Eaters, or uncovering secrets within the Castle.

Of course, photo spots will be aplenty, including a London telephone box where you can pose as though you’re about to travel to the Ministry of Magic. Don’t leave without grabbing some snacks! Inspired by Honeydukes, there’s an entire section dedicated to tasty treats - including Chocolate Frogs and Bertie Bott’s Every Flavor Beans.

Based on the pre-opening artist impression photos released, it seems there will be an al fresco dining area, so it is likely that you’ll be able to indulge in some themed grub while there too. Fingers crossed there will be Butterbeer! While we wait for our vaccines, and for travel as we once knew it to resume, you can still browse and purchase these Harry Potter merchandise via the online Harry Potter store. Luckily for us, they do ship to Singapore!