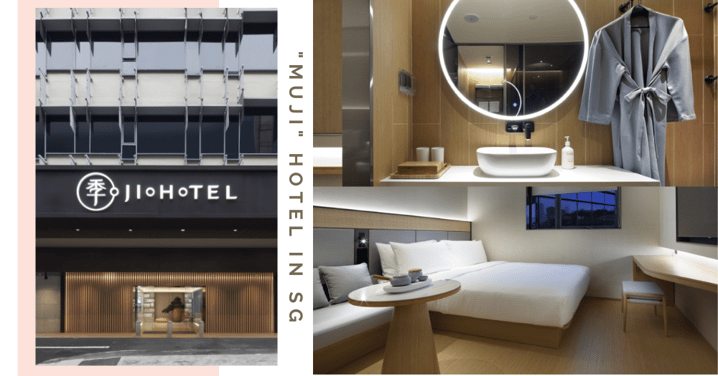 With MUJI being a cult brand among Singaporeans for its minimalist home items, we’re pretty surprised that we have yet to be chosen as one of their hotel branch locations. But here’s a stand-in while we wait: Ji Hotel Singapore, a lesser-known gem in town that’s our island’s very own answer to the famous MUJI Hotel in Japan and China. And it’s super affordable too, with rates starting from just $70/night with Klook’s current promotion.

Oh, it’s also eligible for SingapoRediscovers Vouchers, which means you’ll be paying a grand total of…*drumroll*...a grand total of $0 if you have yet to use yours up!

Read on to find out more about Ji Hotel in Singapore!

Despite being located along Penang Lane, a mere 5-minute walk from Plaza Singapura at Dhoby Ghaut, Ji Hotel Singapore is still pretty unheard of among locals. It is relatively new, having just opened not too long ago in 2019.

We’re not sure if the hotel’s name is a purposeful nod to the Japanese household brand or just an uncanny coincidence, but whatever the case, the MUJI vibes are strong with this one - with plenty of simple wooden furnishing and light colours.

There are just 2 types of rooms at Ji Hotel Singapore: Superior (from $100/night) and Deluxe (from $140/night). Across both categories, the rooms have a soothing zen atmosphere similar to some of boutique hotels in Japan - sans the squeeziness.

Aside from the bed, you’ll also get to stretch out on comfy futon seats built-in against the wall. Sit back and relax as you catch a show on the smart TV, which past customers have praised for having a relatively large 65-inch screen.

One thing we’d like to highlight is the fact that the bathrooms have a semi-open concept with translucent glass walls, which will result in some awkwardness if you’re staying with family or friends. Hence, this is probably best for couple staycations - and what better way to spice up your romance than with a bit of such cheekiness? ;)

The walk-in vanity sink area has a circular mirror with a light-up rim, which makes it extra fuss-free for makeup junkies to get their look on point before heading out.

Shower amenities and even bathrobes are all provided, along with complimentary tea, Milo, and small snacks like biscuits. In light of the current pandemic, they also kindly provide masks and hand sanitiser.

Photo from Hwee Yin via Klook

Interesting to note is that each room comes with a traditional tea set, which further amplifies that lovely pseudo-Japanese vibe.

The Deluxe rooms do not particularly vary in style from the Superior rooms, with the main difference being extra space to move around in more comfortably.

Ji Hotel doesn’t have a swimming pool, but there is a lounge which doubles up as a common 24-hour self-serve launderette and fitness corner with cardio equipment. Here’s also where you’ll find a coffee machine and vending machine.

They don’t serve meals either, but with Plaza Singapura just across the street and plenty of other food options in the vicinity, there’s no way you’ll go hungry.

If you’d like a longer staycation instead of a one-night escape, take advantage of Klook’s current promotion where you’ll be paying just $140/night for a 2-night Superior room stay, and $180/night for the Deluxe equivalent. That works out to just $70/night and $90/night respectively! Divide that by 2 people, and you’ll be paying from just $35 per person per night.

Make your booking via Klook here.

Check out our other staycation articles: