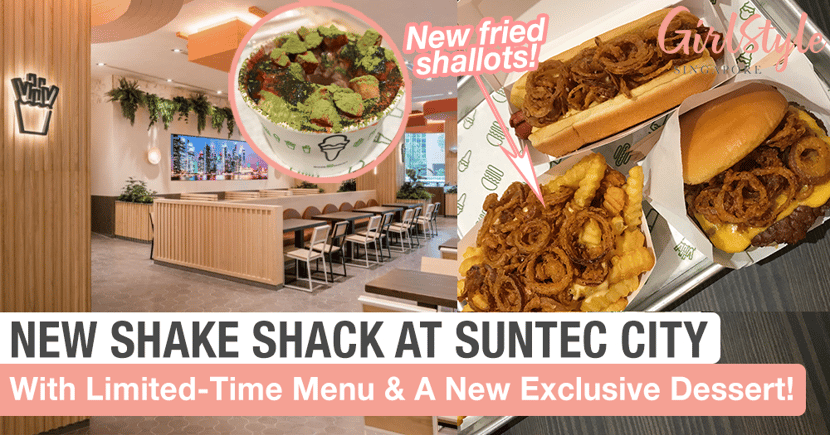 Any Shake Shack lovers? Look out for the new Shack Shack outlet at Suntec City opening next Wednesday, September 30th!

The fan-favourite ShackMeister™ menu will be available exclusively at this new location before debuting across the other Singapore Shacks for a limited time. This outlet will also have a new exclusive concrete dessert.

Keep reading to check out the new outlet and menu additions!

At the west wing entrance, look out for the colourful mural created by local artists RIPPLE ROOT welcoming you into the Suntec City Shack. The artwork depicts the origins of Shake Shack from its first location at Madison Square Park in New York City to this new outlet. Inside, Shake Shack signatures are reinterpreted as a modern-day still life painting. Here's a look at the limited-time ShackMeister™ menu and the new exclusive concrete: The ShackMeister™ puts a delicious spin on the classic ShackBurger® with a generous pile of crispy fried shallots on top of 100% Angus beef, giving it a subtle garlicky flavour and crunch.

The shallots are marinated in custom-brewed ShackMeister™ ale, tossed in cayenne and paprika, then fried. It's similar to onion rings but lighter, crispier and, dare we say, better! We found ourselves wishing Shake Shack would offer it as a side dish on its own. Shake Shack's flat-top dogs are topped with the same delectable fried shallots. This is definitely a level-up from Shake Shacks regular hot dogs with crispiness, saltiness and cheesy goodness in a single bite. The cheese fries and shallots work great together too. Make sure to go for the shallots buried in the cheese first as they'll lose their crunch quickly.

The ShackMeister™ menu will be available until November 16th 2020 (launching at the other 3 outlets on October 5th). Exclusive to the new Shack is this strawberry-matcha concrete! This dessert has a light and refreshing taste without being cloying.

Tangy strawberry yuzu jam complements the creamy vanilla frozen custard and buttery shortbread. We couldn't taste much of the premium matcha powder topping but it does add an aesthetically pleasing touch to the dessert.

More new places in Singapore to check out: