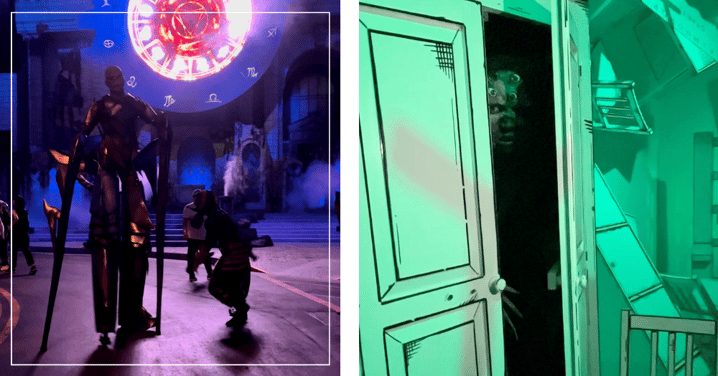 Halloween Horror Nights is back at Universal Studios Singapore for its 10th edition! Held from 30 September to 5 November, visitors will be in for a scare-fest while they explore three haunted houses and two scare zones. There's also a laser-tag challenge, horror-themed dining and a behind-the-scenes experience.

If you'd like to have a gist of what to expect without getting spoiled on the scares, keep reading to find out!

This haunted house was pretty scary stuff, with creative illustration-themed elements that'll make you feel like you're trapped in a demented manga world. The horror actors also did a fantastic job with unexpected jump scares and uncanny body language taking up the creep factor. Although the previous sets have been redressed in a new exciting way, they're still fairly recognisable. If you've already visited previous editions of HHN and want to see something completely new, we suggest leaving this one to the end and prioritising the other two haunted houses.

Years ago, world officials had a top-secret meeting to form Operation: Dead Force, the ultimate weapon against a Zombie Apocalypse. This very weapon is a nerve agent which mutates living cells into dead cells. In short, visitors turn into zombies to defeat the zombies.

A visually stunning haunted house, every corner was decorated in great detail and each room surprised us with creative concepts. The makeup and prosthetics of the scare actors was also stellar, and reminded us of the ones we'd see on TV and film.

Sadly, our legs gave out and we didn't walk through this haunted house. But here's its story: A once glorious mansion was eventually left abandoned for decades. After its restoration, the mansion has been repurposed as a hotel with attractive discounts for guests to stay the night to test out the hotel. But, you guessed it, the hotel has some unfinished stories of its own.

Decades have passed and the Horrorcle's prophesy is about to come true. As darkness descends, the Horrorcle rips the Dark Zodiacs from the skies and summons them to the sacrificial grounds of the fallen zodiac. To complete the prophesy, the Horrorcle must consume an offering from each Zodiac, filling her with necromantic power to reincarnate into their supreme leader, the 13th Zodiac.

Monster versions of each zodiac will be parading around and scaring passerbys. Their getup and acting was a 10/10. Besides being terrifying, the costume designs also made them seem strangely attractive.

#2 The Hunt for Pontianak

A group of influencers venture deep into the Malaysian jungle for their most dangerous live stream challenge – to hunt and trap Southeast Asia's famed vicious spirit, the Pontianak.

This was our favourite of all the activities and the most unnerving experience. The set-up had an organic look, as if we'd actually wandered into a random forest area and discovered the abandoned tents and other belongings of the influencers. Said influencers will also be wandering around warning you not to go further - a nice touch that made us feel like we were main characters in a horror film.

Participants are taken deep into a facility where the world's deadliest criminals serve out their sentence. Teams of five will have to solve puzzles to escape the clutches of the blood-thirsty villains.

Here's a tip on solving the puzzles, think simple! The numbers you need to unlock each door are displayed rather conspicuously. It's best to focus on having fun taking out the bad guys instead. There will be a scoreboard at the end where you can find out how many villains you shot.

This experience is priced at $38.

Of course, there will also be spooky food and drinks. For a simple meal, head to Loui's NY Pizza Parlor to get their set meal ($24) which comes with an eyeball pizza, worm cake dessert and drink. The "eyeballs" are made of blueberries in the hollows of lychees.

If you're in the mood to spurge, go for the Die-ning with the Dead experience at KT's Grill ($105). This horror-themed meal is paired with a comically cryptic journey into the other realm by the Spirit Medium and his creepy Henchmen, in search of the fabled MissFortune.

Guests will go on a tour hosted by The Keeper, where they can witness the magic behind various technical and sensorial effects, enjoy some photo ops and a spooky performance.

This experience can be enjoyed with an add-on price of $38.

The Universal Studios Singapore's Halloween Horror Nights 10 tickets can purchased online at rwsentosa.com/hhn at $78 for peak nights and $68 for non-peak nights per guest. The event will run across 19 event nights from 30 September to 5 November (13 peak nights + 6 non-peak nights).

If you're going in a group of four, go for the Frights for Four bundle deal of 4 tickets ($388 for peak nights and $338 for non-peak nights) which comes with perks including early entry to the park at 5pm and a Halloween Horror Nights set meal. For an even more exclusive experience, sign up for the R.I.P. Tour ($288 per guest), which includes Halloween Horror Nights Express Unlimited for haunted houses and rides, Die-ning with the Dead and Monsters & Manifestations. Guests can also enjoy many of the theme park’s exciting rides and attractions during event nights.

Enjoy savings with every two tickets booked when they pay with Mastercard® and save with every regular ticket booked for Maybank Singapore and Malaysia cardmembers.