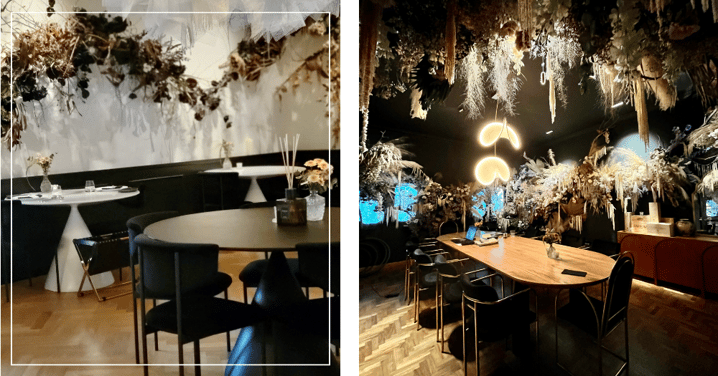 Ce Soir is yet another floral-themed dining establishment that just arrived on the Singapore culinary scene. But what sets it apart from the others - including the cafes created by the same team: Le Jardin and Cafe De Nicole's Flower - is it's fine dining concept with reasonably priced multi-course meals.

The journey to Ce Soir will take you to the serene and remote Portsdown area, where it's hidden behind Under Der Linden cafe.

Set in an old black & white colonial bungalow, Ce Soir's interior has an air of subdued opulence. There is definitely a sense of luxury from the finishings and furniture; I recognised the sculptural tables that could be the award-winning Clay tables by Desalto. At the same time, the upscale aesthetic is grounded by a muted colour palette and floral arrangements that bring a comforting, home-y touch.

Offering a more intimate dining experience, the Private Room makes an extravagant statement, covered in black walls and dramatic floral arrangements creating a cosy, cocooned ambience. This room is available with a minimum spend of $1500 for lunch and $3000 for dinner.

My first impressions of Ce Soir - luxurious yet unintimidating - were furthered by the restaurant manager and servers who welcomed us warmly and didn't make the whole affair seem too formal.

Led by Chef Koh Han Jie, who has established his expertise in French cuisine through years in Michelin-starred establishments, Ce Soir offers course menus featuring classic French dishes with a modern Asian touch and floral elements. These menus will change seasonally so diners can always be surprised with something new.

It began with assorted breads and butter, including a plain one and a spiced version. The pillowy soft truffle bun made for a lovely appetiser while the other breads worked well as palate cleaners between courses.

A moment later, Chef Koh emerged with the pretty and dainty Canapes served on elevated dishes, and explained the recommended tasting order from the mildest to strongest flavours.

Things got to an impressive start with the Gougères, a wonderfully fragrant and airy puff pastry with a medley of cheese, truffle and onion flavours. After that was a refreshing burst of umami from the Salmon Roe Tartlet with crème fraîche, followed by the crispy Charcoal Kuih Loyang with smoked eel.

The next course was another stunner. Arranged in a rose shape, the Hiramasa Kingfish was layered with thin slices of green apple and surrounded by a sauce made with boiled apple juice infused with chrysanthemum and goji berry tea.

This dish had wonderfully balanced flavours that were pleasing and light, with tanginess from the apple and subtle fruity aftertaste complementing the natural sweetness of the fish.

But the seafood course that really hit the spot was the Ora King Salmon. Expectations were already high since this fatty fish is often regarded as the wagyu beef of the seafood world. Still, I was amazed as this was the most perfectly cooked salmon I'd ever come across (and I eat a lot of salmon) with a beautiful medium-rare doneness. The meltingly soft flesh was packed with juiciness while still having the light, flakey texture of cooked fish.

The presentation was also on point, plated like a work of art with tiny dollops of chervil root, Maitakae mushroom and asparagus. The rich beurre blanc elevated the clean-tasting salmon, giving it a luxurious mouthfeel and a bright, buttery taste, while the foam added a hint of lemongrass. If Ce Soir ever introduced an a la carte menu with this salmon, I'd make plenty of revisits for it!

After that dazzling course, my dining partner and I were presented with an ornate Japanese box containing different knives for our choosing. When asked how to best pick the right knife, the restaurant manager advised us to "go for the one that's calling you." Neither of us were the discerning type when it comes to knives, but we appreciated this little gesture and the bit of fun it added to the experience.

That said, the knife I chose was barely needed with the Yukimoro Snow Aged A4 Full Blood Wagyu (+$32) as the uber tender meat tore apart with ease. Not to be dramatic, but I felt actual despair after the last bite of this incredibly luscious steak. It was delightfully rich, well-marbled and juicy without any cloying fatty taste.

But unfortunately, the 10/10 streak ended with the other main course -the Kurobuta Pork with pumpkin, sansho pepper and asparagus.

Although the doneness was just right, the pork was a tad dry and lacked the succulent quality expected of Kurobuta pork.

The other choice of main course is the Lumina Lamb with morels, wild garlic and carrot.

After that was a pre-dessert, which was not on the menu, for us to clear and prepare our palates for the main dessert. We let out a "wow" as the flower-filled plates landed on the table, but the dessert itself was the real star of the show.

Inside the glass bowl was shiso sorbet covered in a milk foam. There was an unexpected ginger zest that harmonised well with the refreshing and tart flavours.

And finally, the most extravagant-looking course - Prickly Pear. This creatively plated dessert was served on a doughnut-shaped glass bowl that created the illusion of the food resting on flowers.

A mascarpone-centred dessert, it had a velvety rich cheese flavour that was elevated by the tanginess of strawberry. Completing the dessert was almond crumble and a biscuit ring decorated with more mascarpone and strawberries.

Our elaborate lunch ended with the Mignardises - earl grey macarons with lavender and mini madeleines topped with shaved lime.

To sum up the experience at Ce Soir, it was indulgent, relaxed and oh-so satisfying. The food quality was stellar and every course was creatively designed with refined and balanced flavours. The ambience was undeniably posh but still casual enough for us to feel like we were dining in our own stately home. On the service front, the servers were always attentive yet made sure every table had their own personal bubble. And it was most certainly worth every cent of the $98.

More restaurants in Singapore for romantic dates and special occasions: