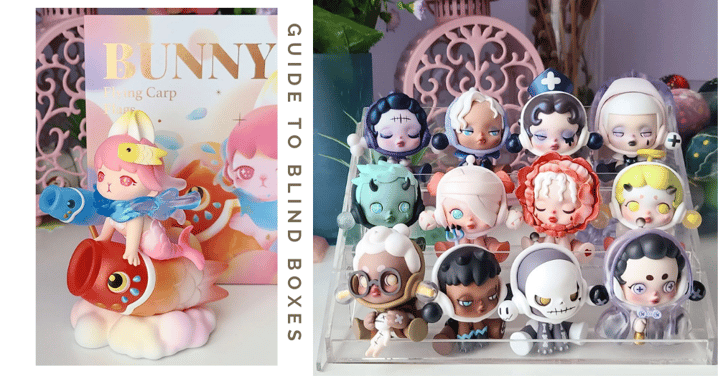 A new craze has taken over Singapore and this time, it ain’t food-related. People have recently started going crazy over designer toy figurines, and with the rapid opening of multiple POP MART stores, their character-themed exhibitions, and the new XM Store & Cafe, the hype is being further-fuelled - especially when it comes to blind boxes.

If you’re keen on starting your own collection, here’s a handy guide on collecting blind box figurines in Singapore, covering all the info you need on where to buy them, how to store them properly, and the lowdown on secret items and re-selling for profit.

Where to buy blind box toy figurines in Singapore

One of the most popular blind box figurine retailers in Singapore is POP MART, a Hong Kong-born company that has numerous toy designers under their belt. Characters under POP MART include popular names like Dimoo, Molly, and Pucky, as well as Disney Princess and Sanrio favourites.

POP MART figurines can be purchased at their physical stores and online store, their Singapore-based Shopee Mall store, or via their official Tmall store in China. You can also buy from the POP MART Roboshops (essentially vending machines) across various malls in Singapore.

Photo from The Green Party

The Green Party is another place which toy collectors flock to for their blind box fix. They carry a completely different range from POP MART. A number of these are under the label Rolife, which includes characters like Nanci and Yuri. Other well-loved characters include Laura and Emma, a lolita-style range of cats, bunnies, and bears in kawaii outfits.

There’s also the homegrown Mighty Jaxx for those who’d like to support local. Look out for cat dim sum figurines under Nyammy Treats, on top of their best-selling Hidden Dissectables  range, which features characters from popular franchises like My Little Pony, One Piece, and Spongebob Squarepants with a slightly morbid skeletal twist.

Action City is quite the one-stop shop for blind box toys, with figurines from POP MART, Mighty Jaxx, and others.

Prices of these blind box figurines vary depending on character and series, but generally, expect a regular non-limited edition figurine to cost between $12.90 to $24.90.

How do blind boxes work?

Remember those carefree childhood days of buying gachapon items from the neighbourhood shops near your home? Blind boxes work in a similar manner, whereby you won’t know which figurine you’ll be getting until the moment you open the box - and that’s the whole thrill of it all.

That’s not to say you’ll be diving in with your eyes completely closed, though. Blind boxes are centered around different characters, so you can choose the character that resonates with you the most.

These are usually released by series, so you’re able to further whittle down your choices from there. While you may love a particular character, some series might speak to you more than others, so you might want to focus on a specific series while forgoing the others. Images of all the possible figurines you might possibly get tend to be printed on the sides or back of the box.

That said, there are no hard and fast rules when it comes to blind box figurine collection. Some fans choose to collect a medley of characters across different series for variety, and this method also helps reduce the chances of you getting repeats.

If you don’t mind the splurge, you could opt to get a full carton of an entire series, which will ensure that you don’t get a repeat - though that will take away the surprise as you’ll pretty much be getting one of each figurine in the series.

New series are launched intermittently throughout the year, though you can almost always expect fresh launches as special seasons like Christmas or springtime approach. The figurines will likely be themed after these special occasions during these periods.

What happens if you get a repeat?

Each series tends to have an average of ~10 figurines and if you don't stop at just one or two, there’s a high chance of you getting a duplicate of something you already own. And no, it’s not possible at all to get a refund.

It doesn’t hurt to be a little more forthcoming when trying to score a trade; Some people list their figurines up for sale without mentioning trades, but you still try politely asking if they’re keen to go swapsies, ‘cause they might just say yes (unless they’ve specifically stated “no trades”, of course). In fact, this writer once got 2 repeats in a row on the same day, but managed to secure trades for both within 24 hours thanks to online postings and mass-sending of cold DMs.

Personally, I prioritise trading repeats instead of selling them away, as you get to kill two birds with one stone by not only clearing off an item you don’t need, but also replacing it with something you're actually looking for. Otherwise, you’ll still need to buy more blind boxes to fill up your collection, which could very well result in even more repeats.

Try not to list your repeat figurine for below cost price unless you’re absolutely desperate to get rid of it (i.e., if it’s a design that’s unpopular). Clearing it off at cost price with additional postage fees is reasonable, but if it’s an item that you know is highly sought-after, try your luck in bumping it up by a few bucks.

Maintaining the value of your figurines for re-selling & trading

Just like how jewellery and Pokemon cards need to be in good condition to have resale value, so do these designer figurines. This is why it’s especially important to open your blind boxes the “right” way if you wish to potentially re-sell them - whether to make a profit, or simply to clear off a duplicate.

It doesn’t really matter whether you open the box from the top or bottom, but it’s important to not tear it in the process or throw it away too quickly, as buyers usually prefer those that still come with boxes.

A majority of these figurines come sealed in a foil packaging, with a collectible card within the same box. This card is also very important to serious collectors, so make sure you don’t lose it!

While the boxes all come with a generic design, the cards will show you the exact figurine you’ll be getting. It would be wise to take a peek at the card first before ripping open the foil. If it turns out to be a design that you don’t want, you’ll have better luck selling/trading it away, as those that remain unopened in their foil are perceived to be in “mint condition”. Figurines without their packaging often have to be sold at a significant discount.

That said, if you know that your figurines are going to be part of your personal collection and don’t have any intention of selling them off in the future, feel free to chuck the boxes away if they’re taking up too much space in your house.

Every series tends to have a super rare “secret” item that you’ll only be able to nab with extra blessings from lady luck - creating an added layer of surprise to the whole experience. The design is shown as a question mark on the box, but photos of the full series, including the highly-coveted rare item, are easily searchable on various retailers' websites.

These secret items can fetch a pretty price if you’re willing to sell them. Generally, people price them in the 3-digit range - way higher than the original cost of the figurine - just because of how hard to come by they are.

Occasionally, you’ll come across mega-sized versions of these collectible figurines, sometimes at 400% to even 1000% of the regular ones. Not all of these larger versions come as blind boxes - many can be bought as is - but across the board, all of them are limited in quantity. Some models even require you to win a special “lottery” ticket of sorts before you can even purchase them!

How to display your blind box figurines properly

Of course, you can display your figurines wherever and however you like, but we’d strongly recommend keeping them away from sunlight so as to preserve the paint job and prevent any fading.

Some people choose to leave their blind box figurines uncovered and simply have them sitting on their work desk or shelf, which is perfectly fine. Others get transparent display cases with multiple rows or tiers to show off their collections neatly while keeping dust out. There are also individual casings that fit just one figurine and can be stacked.

A quick search on Shopee or Taobao will give you plenty of results for inexpensive acrylic figurine cases, with either plastic or wooden bases.