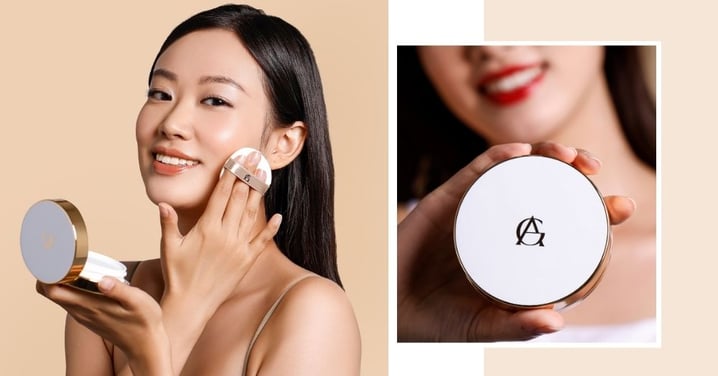 Tried & Tested: This Foundation Is A Gamechanger For Those With Oily Skin

As someone with oily skin and rather active sebaceous glands, it takes no time at all for my face to look shiny in Singapore’s humidity. And while I prefer a dewy skin look as opposed to a completely matte face, finding the right foundation has been super tricky so far.

There’s a fine line between looking dewy and oily - when I use lighter foundations with a dewy finish, I tend to look like I’m perspiring profusely instead. And while matte formulations might be the answer to my foundation woes, I find that they tend to look cakey and unnatural on me.

Recently, I had the chance to try out the Naturale Glow Cushion Foundation SPF50 PA+++ & HD Pressed Powder Duo from Ange Gardien Paris, and it’s been a gamechanger for my oily skin. A 2-in-1 cushion foundation that comes with a translucent pressed powder, this nifty compact manages to control shine while giving me natural coverage that doesn’t flatten my features.

Scroll down to see how the Naturale Glow Cushion Foundation fared against my current foundation!

I picked up the foundation with the provided puff and was pleasantly surprised to find that a little product went a really long way. Just one gentle dab was all it took to cover half of my face and while it was a very thin layer, it was enough to visibly brighten up my skin tone thanks to the 2% niacinamide in its formulation.

To reduce the appearance of a blemish on my chin and some pigmentation, I added another thin layer of foundation on certain spots. Overall, I was quite happy with the coverage provided and didn’t have to reach for my concealer.

There was some shine on my cheek after close to 8 hours of wear, but my complexion could still pass off for a dewy look. In comparison to my usual foundation, there wasn’t much excess sebum - especially on my T-zone and chin.

I often rely on loose powder for sebum control, but it can be a hassle to bring my jar of powder and brush out. Reapplication is also often a messy affair - I have to sit down or find a public bathroom, and powder tends to get on my clothes or spill in my bag. Plus, the germaphobe in me feels a little iffy about doing touch-ups in public toilets because I don’t know how hygienic the bathroom counters are!

This nifty 2-in-1 cushion from Ange Gardien Paris contains both the foundation and pressed powder, which makes things considerably easier. What I love about it is that there’s no need to bring an extra brush or applicator either - the top part of the cushion puff is made with an anti-bacterial rubycell material for foundation, while the bottom part of the puff is fibre-flocked for easy, yet precise, powder application. I could just whip it out anywhere and anytime I needed a touch-up, even while I’m walking!

The HD pressed powder in this cushion compact is made with potato powder, which is super effective at controlling your skin’s sebum production and absorbs excess oil without any caking or creasing. It is also very buildable, so if your skin looks especially oily that day, don’t be afraid to pat some extra layers of powder on your T-zone, cheeks and around your nose!

Most people ditch the blotting paper after their teenage years but for those of us with oily complexions, these thin sheets of paper are an absolute necessity, especially in situations where we’re in non-air conditioned environments.

And here’s a tip if you have oily skin as well - blot your face after your skincare has absorbed, before putting on your base. By wicking away this excess oil and moisture, your base makeup will be able to adhere to your skin better, resulting in longer wear.

With Ange Gardien Paris’ Naturale Glow Cushion Foundation however, I found that I didn’t need to carry blotting papers with me. The pressed powder was enough to keep my shine under control, even when I’m wearing a mask. The layer of powder also helps a lot with keeping the foundation in place, thereby reducing the transfer on my mask.

While this foundation worked wonders for my oily skin, it’s suitable even for those with other skin types, including dry skin! The formula contains pretty nourishing skincare ingredients, including adenosine for anti-ageing and acacia peptide for hydration.

In fact, the hydrating properties of acacia peptide in the foundation could be the reason why my skin’s sebum production was kept in check. It sounds counterintuitive, but your skin could be producing excess sebum to compensate for the lack of moisture, resulting in oily skin.

And don’t worry about whether you prefer a dewy look like me, or a matte look - this cushion foundation is capable of delivering both, depending on how much pressed powder you use. Convenient, and value-for-money!

Use the code “REALBEAUTY10” to enjoy 10% off your purchase on Ange Gardien Paris’ website. Applicable to first-time customers only.

This post is brought to you by Ange Gardien Paris.