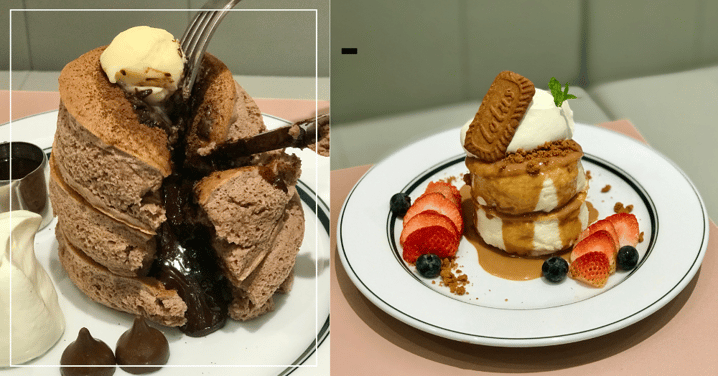 Hurrah for Easties in Singapore! There will soon be a new Gram Cafe at Waterway Point, and it will have outlet-exclusive soufflé pancakes in collaboration with Hershey's plus three new flavours and even donburis, pastas and Japanese breakfast.

Keep reading to check out our review of their new pancakes & savoury meals!

The famous soufflé pancake cafe from Osaka first launched in Singapore at VivoCity in 2019, attracting queues that never seemed to end. Well, prepare to brave the queues once again as Gram Cafe is opening its 2nd outlet at Waterway Point on 12 July with brand new temptations.

Greeting diners at the entrance is Gram's iconic giant soufflé pancake plushie and and Insta-worthy set-up with a swing and neon lights.

The cafe has the same relaxing Muji aesthetic with soft lighting and a calming colour palette.

Complementing the zen Japanese theme is a garden of Eden in Osaka concept with plants, wave patterns and hand-drawn murals.

New and exclusive to this outlet for just three months is the Hersey's Premium Chocolate Lava Pancakes ($20.90).

It comes with the standard toppings of Gram original butter and fluffy homemade
whipped cream, along with Hershey's chocolate sauce and a handful of Hershey's Kisses chocolate.

Rather than their usual creamy beige pancakes, these are tinged with a chocolate colour as Hershey's chocolate is mixed with the meringue batter.

The pancakes had the same light and airy texture as their signature pancakes but with an added rich chocolate taste. And the best part is the warm oozing centre of thicc ganache chocolate.

Gram at Waterway point will also have three new pancake flavours on the menu. We went with Lotus Biscoff Premium Pancakes ($18.90), which comprises of two stacks of signature soufflé pancakes topped with Lotus biscoff sauce and crumble, whipped cream, strawberries and blueberries.

This pancake was simply glorious. The whipped cream added richness and depth to the deep caramel flavour of the Lotus Biscoff sauce, which came together perfectly with the airy and delicate pancakes.

The Lotus Biscoff crumbles and whole biscuit also added a lovely crunch while the fruit gave us some refreshing bites in-between the rich caramelised flavour.

Craving soufflé pancakes but can't convince the non-enthusiasts in your life? We've all been there. That's when Gram's new Mini Dons ($7.90 to $11.90) will help.

As a steak snob, I was pleasantly surprised by their Wagyu Beef Mini Don ($11.90), especially considering its by an establishment that specialises in desserts. The wagyu beef is the real deal, tender, fatty and well seasoned with a perfect medium doneness, rounded off with piquant white truffle purée. It comes with an onsen egg and tobiko.

Another new savoury menu item is pasta like the Golden Red Miso Prawn Pasta ($10.90), another must-try dish. The tiger prawns were a delight - crunchy and fresh, and the pasta had a delicious tobiko taste.

The cafe will also serve all-day Japanese-style breakfast, Pan Fried Togarashi Pink Salmon Fillet ($20.90). The salmon fillet had crispy skin and was cooked well-done without any dryness. But a surprising highlight of this dish was the grilled potatoes marinated with rosemary. It's also served with salad, mushrooms and lemon butter sauce.

Overall, we were really impressed with the savoury food offerings, and the prices are pretty reasonable to boot. It might have even overshadowed the soufflé pancakes if not for the new exciting flavours.

To celebrate its opening on 12 July, Gram is giving away a limited-edition pancake cushion to the first 50 customers who make a purchase at the new Waterway Point outlet. Diners who place orders for the special limited-edition Gram x Hershey's Premium Chocolate Lava Pancakes from 12 to 18 July can top up just 10 cents for a choice of Passionfruit Fizz of Strawberry Fizz.