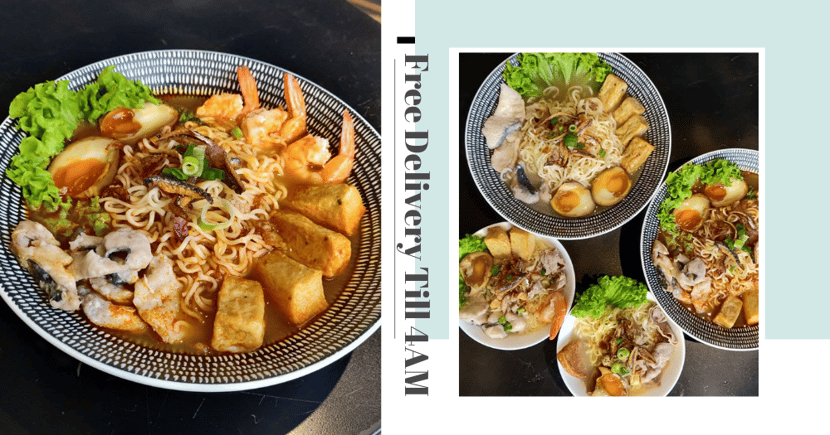 This Eatery Has $2 Beer & Ke Kou Mian "Zhng-ed" With Hanjuku Egg, Open Till 4am With Free 1H Delivery

It’s 1am and the shops in your neighbourhood have already long closed their shutters. You’re curled up comfortably watching your favourite TV show, and then it happens - your tummy starts  making that “gulu gulu” noise. Ugh, at this time?! Yup, we’ve all been there - the battle with late-night supper cravings is all too real.

Instead of reaching for yet another quick packet of instant noodles sans ingredients, switch it up with Stickies’ Ke Kou Mian, which comes with seafood or meat options zhng-ed with hanjuku egg. You can either opt to dine-in at one of their many outlets in Singapore till the wee hours of 4am, or enjoy free 1-hour delivery right to your doorstep till the same cut-off timing! There’s also a special deal which gives you a free bottle of alcohol.

Read on to find out more about Stickies’ Ke Kou Mian promotion in Singapore! Stickies’ Ke Kou Mian starts from $9, which is of course pricier than that of your average kopitiam’s, but hear us out! Ingredients-wise, each bowl is piled high with a generous serving, which makes for a balanced meal with an adequate amount of protein. No noodle dish is ever complete without an egg, and the Ke Kou Mian at Stickies doesn’t just come with any regular egg; Each bowl is topped with a deliciously savoury ajitsuke tamago with gooey half-cooked yolk - also known as hanjuku egg, which is commonly found in ramen - as well as fried fish cake, and lettuce. Check out the full descriptions of each variant here. The Ke Kou Mian and other supper items are part of Stickies’ new SupperLah! menu, which allows you to feast to your heart’s content during late-night hours from 10pm all the way to 4am. Night owls will no longer have to live with hunger pangs or settle for random snacks whenever those midnight cravings hit!

Stickies has five outlets in total, and the four offering this SupperLah! Menu can be found at Aljunied, Clemenceau, Sungei Kadut, and Tagore Lane. But if you’d rather not leave the comfort of home, you can also place your order online and have it delivered straight to your home within 1 hour for free - for any orders over $70 from 12pm to 10.30pm, and for supper orders over $100 from 11pm to 4am. Else, delivery is a flat $7 for orders below those amounts. On top of these deals, Stickies also has affordable alcoholic beverages including Brick Head Pilsner beer at just $2 per bottle, Amber Nectar Lager at just $2.10 (U.P. $13) and Singha at just $2.40 (U.P. $10). Beer ain’t your thing? Get buzzed with other options like champagne and Korean soju from just $6.50! In fact, they’re currently having a sitewide sale with up to 60% off!