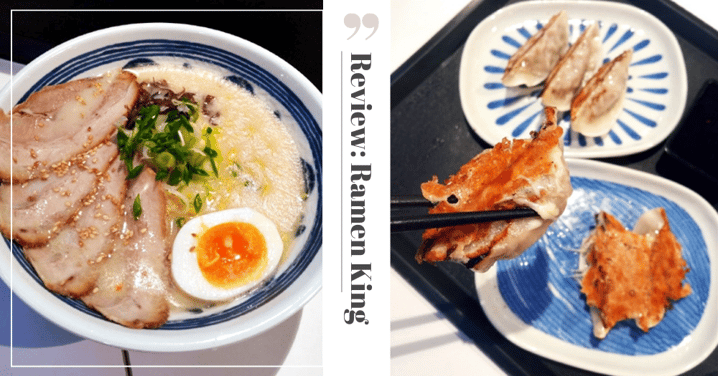 Ever since being spoiled by my few trips to Japan, I’ve been on a never-ending search for the best authentic ramen in Singapore. While certain contenders rank higher on my list than others, nothing has quite hit the spot just yet. So, when given the chance to visit Ramen King, a new ramen eatery in the heartlands, I simply couldn’t pass up on the opportunity. Could this finally be it?

First things first: Ramen King and Keisuke’s Tonkotsu King are in no way affiliated, although we wouldn’t blame you for thinking otherwise because of the name similarities. This potential confusion is also further fuelled by the fact that the red “K” in the former’s logo looks very similar to that printed on the latter’s bowls.

In actual fact, Ramen King was started by chef Simon Song, who once worked at popular Hokkaido ramen chain Santouka. They pride themselves on making authentic ramen accessible, with lower price points, so that all can enjoy it. Here’s our review!

Read on for our review on Ramen King in Singapore!

Ramen King currently has 2 outlets in Singapore - one at a coffee shop in Tampines, and the other at Canberra Plaza. I picked the Canberra outlet mainly because it’s near my place of residence, and of course, the presence of aircon there was an added bonus.

We visited on a weeknight. Amidst the shouts of Japanese phrases from the staff and the chatter from other patrons, things were pretty lively - as is usually the case with most other ramen outlets.

Things started off on a positive note with the Gyoza (3 for $3.50, 5 for $5.50), which were palatable as there wasn’t any overly pungent spring onion or gingery taste that overshadowed the pork. The texture was just right, with the charred skin providing some added texture, and peering into my half-bitten dumpling, I was glad to find a good amount of cabbage as well.

My favourite, however, were the Cheese Gyoza (3 for $4, 5 for $6), which came with a crispy mozzarella layer on top. I don’t usually enjoy “modernised” versions of traditional dishes, but these pan-fried treats are a must-try, especially for all cheese lovers!

With that, I had high hopes for the ramen - especially since I heard that it undergoes a painstaking 4-step preparation process that involves cooking and resting at intervals over more than 3 days.

I first tried the Char-siu Tonkotsu Ramen ($9.50), which is basically the “double meat” version of the Tonkotsu Ramen ($8). It was served piping hot, with all the standard condiments like a heaping of spring onion, black fungus, and ajitama.

Unfortunately, this was a miss for me. The ajitama, though with a decent semi-gooey yolk, severely lacked that salty-sweet umami flavour, and I found myself wondering if it even had been marinated at all. The tonkotsu broth wasn’t rich or strong enough, even by Singapore’s ramen standards. As for the pork slices, they were a little thin, but had a good bite and didn’t taste gamey.

Perhaps it’s all down to personal preference - who knows, those who prefer light flavours might still enjoy this.

Thankfully, the Kurobuta Toroniku Spicy Miso Ramen ($15) packed more flavour - probably thanks to the chilli, which complemented the savoury miso. With just the right level of spice that didn’t leave me suffering, the broth was very drinkable. I wouldn’t say it was mind-blowing, but it was passable for its price, especially in contrast to the previous item. What really carried the entire dish was the tender premium kurobuta toroniku (pork cheek).

The noodles themselves were springy enough, if a little undercooked, though that didn’t bother me as much since I do prefer my noodles on the chewier side.

I’m not sure if the chefs were just overwhelmed or having a bad day, but Ramen King’s claim to “authentic” Japanese ramen is…questionable. But considering the affordable prices, one can’t exactly complain. That said, with other wallet-friendly heartland competitors like Suparakki and Takagi around, they’re really going to have to make some tweaks in order to stand out - starting with their tonkotsu broth and seemingly unseasoned eggs.

If anything, I’d most likely return for the gyoza, and may consider ordering the Spicy Miso Ramen if it’s a rainy day where I’m craving something spicy and comforting in the ‘hood.

In the meantime, my search for the perfect bowl of ramen in Singapore continues.

More eateries to try in Singapore:

Share this with a friend who likes Japanese food!