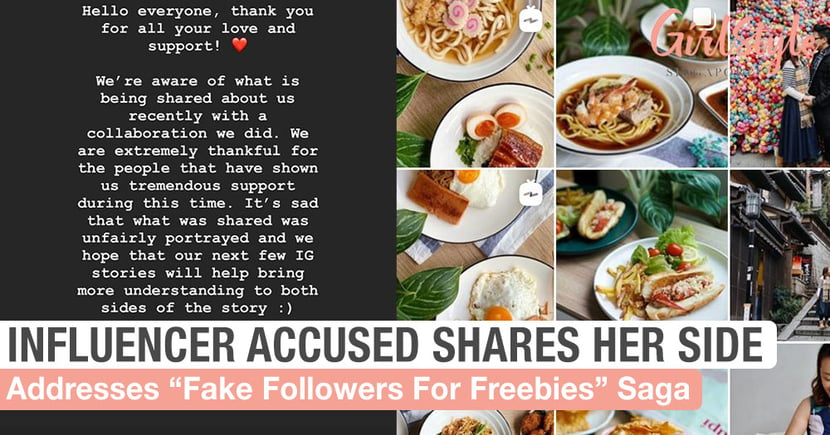 Recently, a Facebook post by Venie Lin, co-founder of frozen food business Frozendozen, went viral for calling out an influencer. The influencer Xue Wei, whose Instagram page is called An Affair With Food (AAWF), allegedly used fake followers in an attempt to weasel freebies out of Frozendozen and many other small local businesses.

However, every story has two sides, and perhaps what we’ve seen so far isn’t all that it seems. Addressing her side of the issue, Xue Wei posts a series of Instagram stories detailing her account.

If you missed Part 1, check out our article on it here.

Read on to find out more about the saga between Xue Wei from An Affair With Food and Frozendozen’s Venie Lin! Xue Wei’s Instagram stories are pretty wordy, so we’re breaking them down for you.

The earlier part of her story is more or less consistent with Venie’s. Initially, Xue Wei was supposed to be sponsored $300 worth of food. However, she does not sign contracts for non-paid collaborations, and to be fair to other companies she’s worked with, she chose not to sign for this as well. The pair then came to a consensus on an email agreement. However, Venie’s management could not allow for the collaboration to proceed without any signing, hence the $300 worth of food was reduced to $100. This exchange ended on a friendly note. One thing Venie seems to have failed to mention is that she wrongly sent someone else’s order to Xue Wei a couple of days later. Thinking it was a gesture of goodwill, Xue Wei contacted Venie to say thanks and ask what it was for. Turns out, some invoices had gotten mixed up, and Venie asked Xue Wei to return the items by leaving them outside her door for Frozendozen’s driver to pick them up. By then, most of the items had already been opened up by Xue Wei and her husband Keith, but they packed them up as per Venie’s instructions and left them outside for pickup.

Following that, Venue sent a lengthy email to Xue Wei, stating her displeasure over how the food was just left in a plastic bag outside the house. That’s also when she asked for a $93.05 refund for the items that were previously sent over for the collaboration. From the previous text exchange, it is unclear as to whether Xue Wei was specifically told to put the items in the cooler bag, or just a bag. Defending herself, Xue Wei says that she cannot be faulted for opening up the items that were wrongly delivered, as they were sent to her home and she needed to check them. She also mentioned the Frozendozen’s delivery man made off with her personal tote bag.

Xue Wei admits that she did send out messages to various businesses for collaborations, but claims that she has never provided false information or statistics. She also states that if a company is having doubts about an influencer’s engagement, they can always make the choice to not work with them and move on. Addressing the random spikes in follower count - which Venie claims is a sign of bought followers - she attributes that to other forms of outreach such as giveaways and a website with regular articles. According to her, her posts do not immediately gain a huge engagement, but rather, take time to climb in terms of reach and likes.

Ending the series of posts on a positive note, she thanks all her supporters and says that she hopes everyone will see things from her point of view before casting judgement, as “inciting hate and negativity towards anyone is never the solution.” She also says that she will “reassess and be more mindful in [her] outreach efforts in the future.” Well, it takes two hands to clap, and perhaps this issue was blown out of proportion due to a few misunderstandings. Ultimately, only the ones involved will know the full story of what exactly happened.

Whatever the case, we hope Xue Wei and Venie will be able to clear the air between them and move on peacefully from this incident.