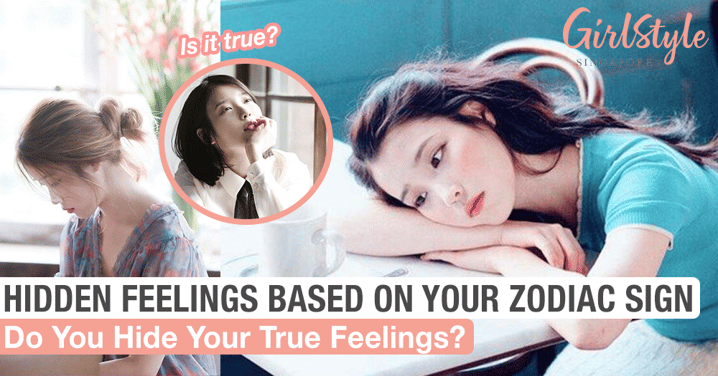 It is common for us to suppress our feelings once in a while, but some of us are wired to avoid admitting what makes us uncomfortable or nervous.

Many of us do even share our feelings in stable relationships. Each of us is different and unique in one or the other way. Sometimes we want to hide our feelings for fear of dramas in our life.

Scroll on to read more!

An Aquarius often forgets to remember how beautiful life is. You get stuck in routine and easily find yourself feeling like there is no way out.

Your tendency to run from expressing your emotions may be the reason why you’re hiding your feelings. You sometimes feel as though you need to prove your independence, so you shut down in order to avoid asking for help. Remember, you can be autonomous and admit those tough feelings sometimes, Aquarius.

Pisces feels it's hard sometimes to connect with other people because they are so used to living inside of their own head and their emotions. You can isolate yourself easily when you get this way.

Although you’re extremely intuitive, you occasionally trust people too much, which enables you to open up and share your true feelings. However, when it comes to being honest about something you don’t like, you avoid confrontation at all costs.

An Aries sometimes doesn't believe in themselves. They need to be reminded of how great and brave they are!

You don’t have the time nor patience for petty arguments, making you the queen of honesty. You tell it like it is, which includes making sure others know exactly how you feel. Nothing wrong with taking control of the things you want!

A Taurus shuts themselves away when they are sad. They often need someone to sit in silence with them rather than forcing them to talk.

You’re always dependable until it comes to sharing any feelings that harm your agenda. Your stubborn ways prevent you from truly expressing yourself due to the fear that you’ll lose an argument. This forces you to hide your feelings as a way to avoid an unwanted compromise.

A Gemini, feels isolated from the people they love and put on a mask as if they're the party and constantly happy just to please everyone else.

While you’re prone to sharing your exciting ideas, you may close yourself off from revealing any negative feelings in order to keep the party going. The desire to always have fun can often override your need to get something off your chest.

A Cancer sometimes feels like they put all the effort into their friendships and relationships. You tend to think that if you stopped trying, all of your interpersonal relationships would fall apart.

Your sensitive ways may cause you to have a lot of feelings, yet your insecurities prevent you from letting others know about them. Even though you’re secretly holding a grudge, you won’t necessarily tell anyone about it; hoarding your feelings is what you tend to do best.

A Leo can get so insecure, not just within looks, but they can start to think that everyone hates them and doesn't care about them.

Leo, your relationship to your feelings is complicated. While you’re transparent with those you care about, your arrogance can inhibit you from exposing your innermost feelings. You might share enough to maintain people’s interest, but you’ll think twice before admitting anything too personal.

A Virgo can easily start to feel like they aren't ever going to amount to anything and there is no use in trying.

While you might be able to admit that you’re overly critical towards yourself, it’s telling people why that stumps you. The truth is, you might not even be able to entertain your true feelings by yourself.

A Libra can often feel like they are unlovable. You tend to be your worst enemies in this way.

A Scorpio, sometimes feels as if the world is against them. You have a lot of weight on your shoulder when things go wrong.

Because you’re both secretive and a stellar friend, you’re willing to open up only to those close to you. The good news is no one expects you to expose your feelings to just anyone, so no one will accuse you of hiding how you really feel.

A Sagittarius feels as if they always need to please other and can forget about themselves. You say yes to favors and cater to what other people want you to be.

The fact that you lack a filter may bother some people, but at least it means you never hide your true feelings. If anything, you want others to know all of your opinions and all you can do is hope that they agree.

A Capricorn can often feel stuck. You tend to get down on yourself when things aren't working the way you want them to.

You’re sure of yourself in a way that pushes you to say what you mean and mean what you say. As someone who has a strong opinion about almost everything, you don’t waste time by concealing your feelings. In fact you believe that having your judgments at the forefront will help weed out all of the phonies.

While we are at this topic, you might want to try out our 4- doors personality test.